These are essentially sockets on every ship component which interact with power or heat. They are recognized as a thin protrusion lit by blue lights, from above naturally. They can be connected directly to another component's port, or by conduits to span any gaps. Conduits come in a few sizes, from those built into hallways, to double length, to the "paint-able" single length ones. ENSURE THE CONNECTOR PORT IS FACE TO FACE TO THE OTHER CONNECTOR

Module connector ports can receive and give out energy instantaneously, so direct connections will allow for instant transfer(unlimited power/tick), T1 conduit connections will be limited to 50/s or 10 per update.

Reactors come in multiple sizes, each with different values for power generated, and heat produced. Reactors produce heat as they generate energy, thus reactors need to be directly connected to heat sinks via conduits or capacitors. Heat and Power cannot pass through any modules or heat sinks, except capacitors. Ideally your combined dissipation should be above your 'optimal' heat generation, if not more. (110% to 130% is a good range)

Reactors are generally safe, but they aren't armored. It is reported that a reactor under significant power or heat load can explode when heavily damaged. The resulting explosion may blast the surrounding hull apart and cause fires. 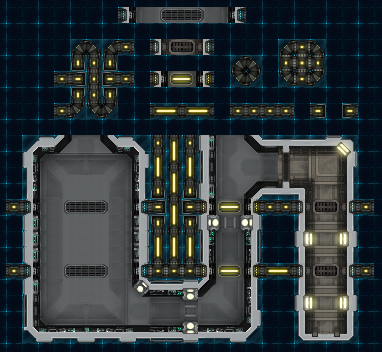 Conduits are the power lines within your ship. They transfer energy in the form of high-energy plasma between components. Practically they bridge the gaps between any connector port.

The heat transportation from reactors to heatsinks is only limited by reactor statistics. When modules use conduits, the first module to update may use all of the capacity of a conduit path, so it is good to optimize conduit designs by giving important modules their own unique connection to a source of power.

As conduits have limited bandwidth you may want to ensure they don't cross too often as power moving from one module along a path can starve power to other modules along the the same conduit. You can use capacitors as 'splitters' to distribute power between consuming modules as some capacitors have superior bandwidth and can accept and provide power simultaneously.

With engineering room module you can overcharge the conduits with an additional update cycle per second.

Energy generated can either be directly fed to the modules to charge up their internal capacitance, or be stored into capacitors. Capacitors store unused energy and release it as needed, functioning like batteries. The brighter their glow, the more charged they are.

Due to the high-energy plasma stored within, higher charged capacitors can catch fire when damaged. Left unchecked a fire can cause damage and spread to nearby tiles, making capacitors a somewhat volatile component.

Energy transfer rate (per update) of a capacitor is limited by the capacity. [1]

Heat sinks are a necessity as reactors produce heat which must be vented. Each type of reactor produces a certain amount of heat when running at optimum output, but for any power over optimum the reactor produces double the amount of heat. As each reactor has a limited heat capacity before it is forced to shut down (80% capacity is shutdown threshold) having more heat sinks than strictly necessary can help provide redundancy. By requirement heat sinks must be placed next to empty exterior tiles and thus are vulnerable to being damaged.

Note that only if the nearest reactor reaches zero heat, will it continue searching for other reactors to remove heat from. So if you want to guarantee a reactor to get the cooling it needs at any time, make a closed circuit for cooling each reactor. Otherwise heat sinks may cool reactors unevenly, leading to a hot design. 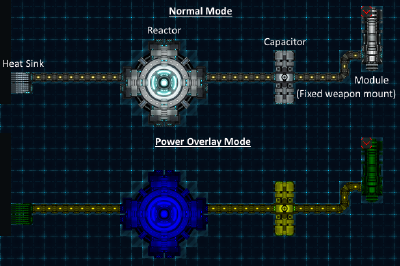 A power system/circuit consists of...